The Man of Steel

Has anybody noticed that a certain someone has been sorely missed of late? When was the last time you heard the phrase, “Faster than a speeding bullet, more powerful than a locomotive, able to leap tall buildings at a single bound”? What you do hear is, “Look, up in the sky, it’s a bird, it’s a plane…. oh, it’s probably just a very plain bird.” So I ask you, why?

There is something else which has also been obviously missing in our world today: phone booths. They seem to have gone the way of the dodo bird. 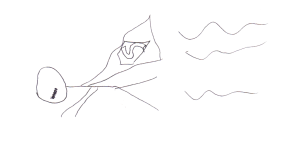 Coincidence? I say not.

And therein lies the quandary that has faced our special hero. Mild-mannered Clark Kent has simply run out of places to change into the Man of Steel. Poor Superman. The phone booth gave him the ultimate opportunity to be rather inconspicuous in his transformation.  With the waist-high barrier, he never feared his goodies would be exposed during this quick-change process. No, the only obstacle he ever had was when that small enclosure was occupied by an actual caller. Although that never seemed to happen.

To make matters worse, the innocuous but convenient storeroom on the TV show is also nowhere to be found. Another victim of recent cutbacks due to a very sluggish economy.

The good news is that, according to my sources, Superman is diligently at work trying to solve this rather perplexing problem. Changing in port-a-potties seems to bring other unwanted side effects. Sure, the privacy issue is solved, but he gets that nasty blue crap all over him, not to mention a rather horrible stench that lingers—it’s the gift that keeps on giving.  He has tried the famous Wonder Woman twirl, but keeps ending up in a skirt when he’s done. Someone actually saw him and dubbed him Stupidman, which deeply hurt his pride. He also tried to borrow that whole Bat Cave thing, but found it way too complicated.

So we are left to ponder many, many what-could-have-beens, because Superman has not been around to save the day.

We can only hope he soon solves this horrible dilemma, as we need him more than ever these days. Come on, Superman, figure it out already. This is not rocket science, for Pete’s sake.  You’re super for a reason.