Secretaries, in the traditional business environment, no longer exist. That term is so last century, as they are now called administrative assistants or administrative aides. That’s appropriate, as the outdated secretary title evokes images of ladies playing a very subservient role, getting coffee for the boss and sitting on his lap taking shorthand. Thankfully, today that stereotypical behavior―to the extent it still exists―gets bosses (mostly men) into lots of trouble. Yay!

So it really surprises me that the heads of the departments in the president’s Cabinet are still called secretaries. Since currently most of these are grown men, the vision of them sitting on the president’s lap seems rather unsettling. As long as we’re on the subject, why the hell are they his (or, hopefully soon, her) Cabinet? I thought a cabinet was a piece of furniture. Maybe the group got its name because most of the president’s secretaries sit around the conference table just nodding their heads and blending in with the rest of the furniture. Are they liquor cabinets or curio cabinets? Who knows? (I’m also very curious as to exactly what a curio is.) 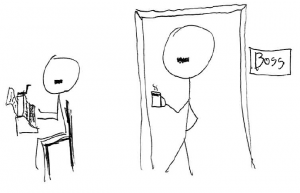 OK, back to secretaries. Let’s explore this. We have a Secretary of State. Which state? All states? State of mind? Intestate? Drunken state? Maybe that’s what they do: they’re in charge of the drunks from the liquor cabinet.

What do you suppose the Secretary of the Interior does? Take responsibility for the inside of the White House, making sure it is properly maintained? Or maybe it’s more of a medical issue; you know, taking care of the body’s interior. Why isn’t there a Secretary of the Exterior? I guess when there are vacancies, only insiders can apply. (We call that a pun.)

Secretary of Labor? Probably oversees the birthing of babies.

What really baffles me is the Secretary of Defense. Is that a position on the football coaching staff? I’m being silly; obviously they defend us if we get invaded by aliens, etc. But it’s unclear whether they can only defend us, and not start any wars. I think that’s the duty of the Secretary of Offense. Oh yeah, there is no such thing. Go figure.

Secretary of Transportation? That’s an easy one. He’s the guy who stands in front of the White House and hails a cab for the president.

It’s also quite obvious that the Secretary of the Treasury handles the issues related to all buried treasure. That includes keeping a close eye on the Pittsburgh Pirates. They hide their loot in the strangest places.

Needless to say, I find this all very confusing. Maybe their titles can be changed from Secretary to Fearless Leader of each department. Or, depending on the president, maybe they should be called Fearful Leaders. Fortunately, this is not a decision I have to make. I’ll leave it to the Secretary of the Navy to sink my brilliant idea. (Sorry, I couldn’t help that.)