Who Took My Sunglasses?

I have a favorite pair of sunglasses. They didn’t cost much, but fit just right and gave me that incognito look. One day, after coming inside for a minute and heading back out, I went to grab those glasses. I was sure I had just been wearing them, so I knew they weren’t far away. Kitchen table, no; counter, no; bathroom, no; bedroom, no. I began to retrace my steps, but still, no sunglasses. 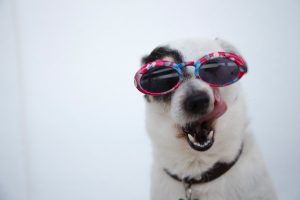 I went back out to my car, thinking I had outsmarted myself and never had them on in the first place. Not there. Maybe I left them on the porch where I was working? Nope.  Now I was getting mad. How could I possibly lose a pair of sunglasses that I just had on? I was driving myself crazy, becoming frantic in my search

Oh, I know, it was my son the comedian who had hidden them from me. I was sure he was behind this. It had to be him. I discovered my boy in the basement, with his back to me.  “OK, so where’d you hide my sunglasses, you stinker?” I asked. He feigned innocence, of course, claiming he didn’t know what I was talking about. Then he turned around and started laughing. “Look in the mirror, Dad,” he said. And there, perched on top of my head, were my favorite sunglasses, where I had swept them back when I had first come into the house. Oy.