Our Armed Forces, both veterans and those currently serving, deserve our utmost gratitude and respect. Without them, we literally wouldn’t be here, enjoying the freedoms they continue to protect. And it is only through their sheer determination, perseverance and dedication that many climb the ladder to achieve the high ranks of leadership during their careers. God bless them.

Which leads me to what I consider a significant level of disrespect, when I see people with military titles unearned and undeserved. Who are they, you ask? I’ll tell you. Oh, and you’ll notice that they are all men, which is no coincidence. 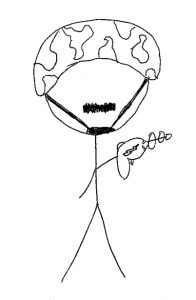 Take for instance, Captain Crunch. Where do you suppose he received his commission? Or how about General Mills? Did he toil away at the lumber factory to get his appointment?

Of course, one wonders how Major Disaster deserves that moniker. Why reward someone for creating nothing but havoc? And General Mayhem isn’t too far behind him. I’m really not a fan of that guy.

Then there’s General E. Speaking. Do you think he was promoted because he learned to double-speak? That more than qualifies him to be a politician instead. And did Colonel Sanders do more than just lick his fingers? He must have licked plenty of boots as well. Actually, I think he raised corn for a living, and they called him “Kernel” Sanders.

One also had to have questions about Admiral TV. I don’t believe he ever even commanded a rowboat. I know that Captain Kangaroo was a great friend to Mr. Green Jeans, but does that qualify him to have such a lofty designation?

I’m sure Sgt. Pepper was a non-com, as there’s no way he could have been an enlisted man. Where did he do his basic training, anyway? At a farmer’s market?

Do you think General Surgery was a medical man? I think they just misspelled his name. He was a diabetic named I. M. Sugary. I’m also really baffled by Colonel Mustard. Why promote a guy who killed Mrs. Peacock in the study with a lead pipe? I mean, he should have gone to jail, for Pete’s sake.

Do you think that General Quarters went to West Point? Or did he receive his rank from his distinguished service at the U.S. Mint? And what about the Attorney General? That’s a clear case of the often used, mutually exclusive term Military Intelligence, if you ask me.

I’m guessing that the captain, of the Captain and Tennille, was just a mere yachtsman. Or maybe a coxswain. You’d probably have to ask her.

So, truth be told, I never served in our military. If I had, I would have changed my name to Harold J. Parts. I would then have thoroughly enjoyed being called Private Parts.