Do you believe in ESP? Color me “unsure,” as I wouldn’t be too dismissive about the possibility of some people having the ability to predict the future. Who knows?  I absolutely do believe in ESPN, though. 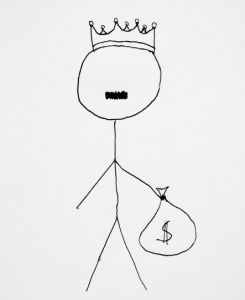 There have been countless instances of very bizarre situations when those seeming to possess that special sense were not only able to tell a complete stranger about their past, but their present and future as well. They could just meet you and see things we mere mortals can’t observe. They often describe being able to view auras surrounding their subjects. I’m so blind to things like that; I wouldn’t see an aura if someone wore it as a bright yellow hat.

I know that if I had those special powers, I would find them rather irritating and distracting. Imagine walking through a crowd and being bombarded with all types of vibes from complete strangers. Think about it: you pass people, and lots of reactions pop into your head. “Hey you!  You’re dying next week.” Or “A big promotion is heading your way!” Or “Aunt Sadie will be calling you tomorrow.” (Better watch out for that, as she’s a real pain in the ass). My head would explode.

Not that I’m a skeptic, but there is one question that perplexes me. If these ESPers can predict the future, why aren’t they incredibly wealthy? As for me, knowing I had this unique ability, the first thing I would do is to go down to my friendly neighborhood 7-11 and pick up my winning lottery ticket. Since I could predict the winning number, I would just select those special digits. I would back up the Brinks truck to the lottery headquarters and collect. And I would absolutely do this many, many times. Or I would marry someone who was about to inherit the motherload from their disgustingly rich relative. I would be able to avoid all accidents, diagnose any upcoming serious illnesses and find the right life partner, who I would know would be sticking around for a while. But that’s just me.

Maybe those with ESP are so selfless that they are completely dedicated to their altruistic craft of helping others. That’s very noble. Again, if it was me, I’d be noble all right. With all of those special powers, I would end up being king or emperor somewhere. You can’t get much more noble than that.